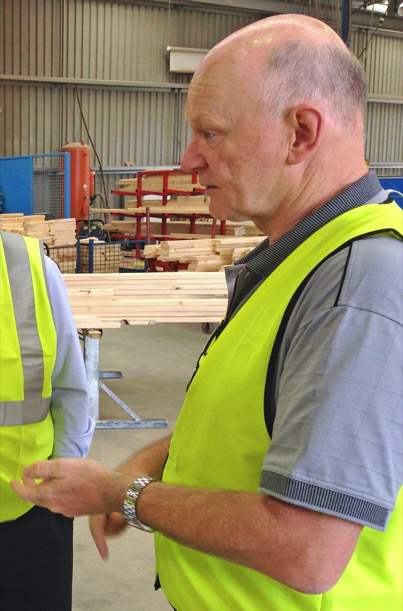 It is safe to say that Peter Ward is a true visionary. It is this very quality that propelled him toward an innovative solution when he needed to grow the truss end of his business, Drouin West Timber and Truss in Australia. His international search for truss equipment lead him to more than just answers. A true partnership, born from innovation, Wood Truss Systems was with Peter through every step of the journey. The year was 2007; Peter sold his sawmilling business in order to focus on building trusses. He realized that in order to achieve this growth, he would need to invest in some good equipment, which led him to Wood Truss Systems’ (WTS) web site. “I found Jay to be very helpful and provided me a contact point in America to find the equipment I was looking for and also introductions to other people.”

Peter wanted to retrofit a table with an Alpine auto-jigging system.  “I thought I was nuked,” Peter recalls from his realization that the table that was listed for sale on the WTS website was not suitable. After some correspondence with Peter, Jay began to look around for other compatible tables. “The line that WTS sold us actually enabled us to grow substantially. That ignited my passion to expand the truss and frame business. That was our first scenario: We had to quickly grow to cover the costs of extracting the business.”

At a population of about 25 million, the comparatively smaller Australian market has some notable differences. Peter explains, “If you’re in the truss and frame business, you’ve got to do everything; you can’t specialize in anything. The vast majority of Australian plants offer the full package.” While DWTT manufactures trusses and panels for roofs, walls, and floors, their team also manages the total supply and install process, which makes them stand out from the majority in their region’s component industry. This aspect of DWTT is known as “Future Fit”. “We introduced this 3-4 years ago to differentiate ourselves,” explains Peter.

Since their initial meeting years ago, Peter and Jay have taken turns hosting each other in their respective home countries.  In the summer of 2010 Peter arrived in Nashville, TN to look at equipment in American truss plants. Jay met him at the airport and the two traveled hundreds of miles together, first to Alabama then to Ohio, over the course of several days to inspect possible equipment purchases. In turn, Jay has spent time at DWTT in Victoria, Australia, where he was able to see Peter’s original vision as a finished production facility.

As Peter Ward continues to digest the panelization business on one side of the globe, Wood Truss Systems will strive to make every effort to meet the demands of their customers on the other. From the everyday basics to the unique challenges brought to the table by industry pioneers such as Peter, the team at Wood Truss Systems remains a dedicated partner to their customers.